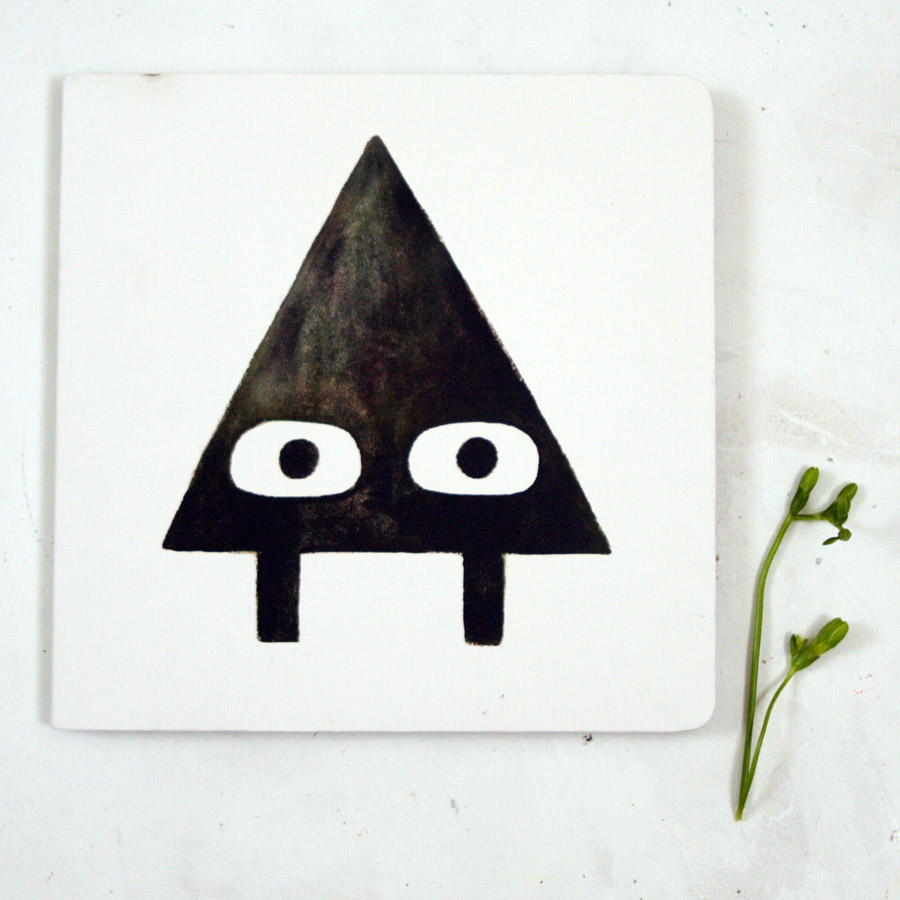 In celebration of Fathers Day,  I spoke with New York Times best selling, Caldecott medalist, minimalist extraordinaire, and new father Jon Klassen.  We spoke about his new book with Mac and his writing a new chapter in life, parenthood.

Kellie: Your beautiful stark designs and wonderful textures are paired with playful text in your new series about shapes with Mac Barnett. The covers seem to give tribute to Bruno Munari’s magic three. How did the two of you come up with the concept?

Jon: Well, I have two things to say about the Bruno Munari thing and they will contradict each other a little. Firstly, I love Bruno Munari like crazy and I have loved him for a long time. He’s a big inspiration and “Design As Art” has never been too far from my desk since I found it in college. That being said, the first time I ever saw his magic three set was the re-issues at a museum bookstore in Sydney, Australia around this time last year, after the Triangle book was basically done and the design for the set was already agreed upon. I sat down in the museum store and thought “nobody is ever going to believe I didn’t see these.” It was a bad day. It’s uncanny – the blank covers with the same black shapes, the white text inside the shape on the back cover, the square trim. I guess some of it is pretty intuitive – they are the most basic shapes and it’s the highest contrast, and choosing a square trim is a logical choice…but I don’t think I’d believe me if I said that I hadn’t seen them before. You’re actually the first to ask me about it, but I knew eventually someone smart would bring it up. All I can say is that I have to be ok with everyone who doesn’t read this interview being under the impression that I ripped him off.

Anyway, the idea Mac and I had for these books was that the three characters look very blank and give very little away, personality-wise, in their design. I don’t really like character design as it applies to drawing things like heroes and villains. You’re basically coming up with a list of weird assumptions or stereotypes and then fulfilling them and it’s not interesting. Like, why do certain visual characteristics make someone look evil, or good? It’s dicey. I like it much better when the character gives almost nothing away visually so you have to listen to what they’re saying to get a sense of them. So we thought we’d try books that got into that a little and try for the cleanest way of differentiating them, which to our minds was just different geometric shapes. What we found though is that we did take cues from how they looked anyway. Triangle’s eyes are further down on his head because that’s where they are best framed so he ends up looking sneakier. Square seems solid and buttoned-down and as a result insecure, and Circle will float around kind of magically because there isn’t a visually graceful way to stick legs out of the bottom of a circle. So you can get traits out of the smallest prompts I guess. Kellie: I enjoy the boyish charm of the playfulness between Triangle and Square. There is an element of mischief in Triangle, along with some of your Hat series characters. As a young boy would you say you were very mischievous?

Jon: I was very un-mischievous actually. But for these books both Mac and I were attracted to the kind of relationships that express themselves in kind of a sideways way. Like, Triangle WANTS to see Square that day. He wakes up thinking about him. But he’s not going to just go over there and say that. It’s almost the same thing as when you have a crush on someone when you’re very young. You want their attention, but you’re not about to just go up and talk to them, so you throw an eraser at their head. Goal achieved.

Kellie: Who would you say is more mischievous you or Mac?

Jon: Mac is for sure the more mischievous, or at least he seems to be more comfortable with it. If you dug all the way down I guess you might find a similar capacity for trouble in me, but I kind of hold onto it very tightly until it comes out in some uncontrollable way and ruins everything. Mac is wise enough to let his impulse for it out in measured ways so it doesn’t warp him. 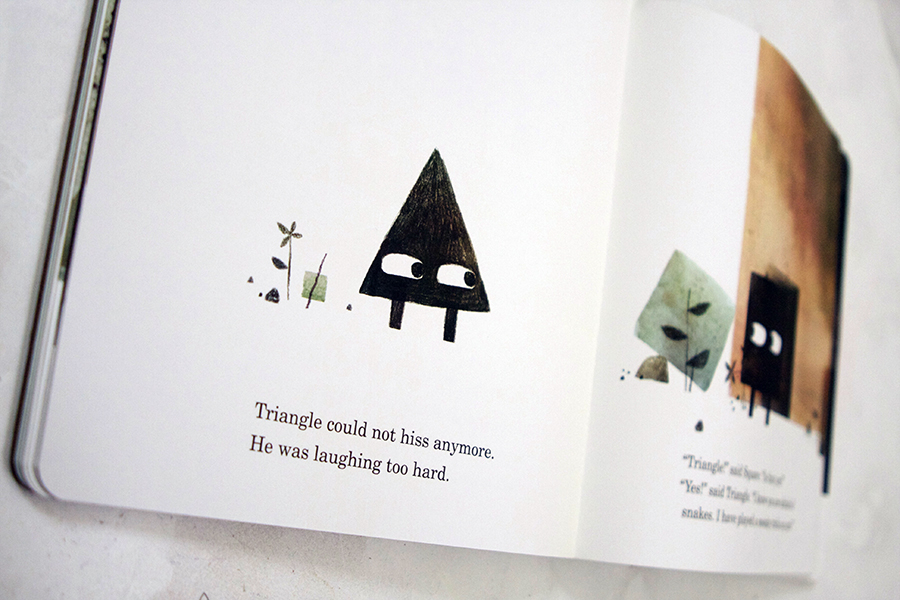 Kellie: You shared a beautiful childhood photo of a happy faced Jon being pulled in the snow by your mother. Nature is a running theme in your art work. Did you spend a lot of time in nature as a child?

Jon: I did! Or it seemed like it, anyway. We lived in a new suburb outside of Toronto growing up, but it backed onto a big empty lot with a small forest on the other side so we had access to trees and ponds and streams but they had like, shopping carts and stray bricks in them. 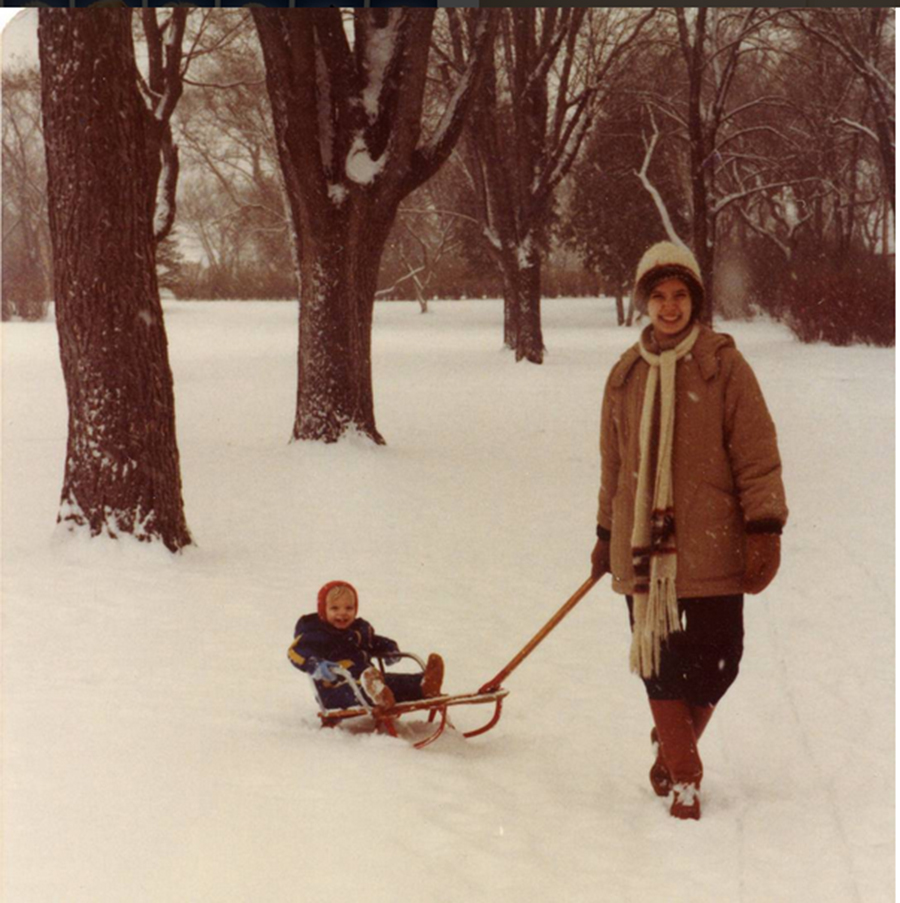 Kellie: How do you think nature has influenced your work?

Jon: Nature has always struck me as really beautiful and really scary at the same time. The natural world is pretty merciless, or at least it doesn’t operate on feelings, so you can set stories in it and just inject the amount of emotion or empathy you want but no more than you need, and it’s believable every time. The rules are all yours. Do animals who talk still eat each other? Do they maybe want to but they know they shouldn’t? Do some animals do better at controlling that impulse than others? Are there “civilized” animals and “uncivilized” ones? All those levers are yours to pull or not pull and defining that stuff can often lead to a story just on its own. Kellie: What kind of books did you read as a young boy?

Jon: I’m the oldest of three boys so I was the first to get my own bedroom, but the tradeoff was that my room was also where my dad kept all his books, so I got into those kind of early on and it led to a really wide range. I read all the Hardy Boys books and Calvin and Hobbes but also I would pull stuff from his shelf and never knew what it was going to be about. I read Roots that way, and some James Michener, and all the Michael Crichtons. It was neat – there was no such thing as good books or bad books, you just read anything that had a spine you’d been staring at from your bed for a month. I think the best way to get kids reading is to just keep books around and in close proximity. It’s a strategy I’m going to copy with my little guy I think. Kellie: Congratulations on the birth of your new baby. What is the first book you bought to start your son’s book collection?

Jon: Thank you! It’s very exciting. I have a bunch of books left over from my own collection, but one that I did buy for his shelf that I didn’t have growing up was “Sylvester and the Magic Pebble” by William Steig. I didn’t know about Steig until I started making books myself but I’m really excited to see how it goes over with him when he gets a little older. I think I would’ve loved his books – it’s the finest writing for kids I’ve ever seen.

Kellie: Children are a wealth of inspiration. They seem to open us to new a new world while also moving us to reflect more inward on ourselves. Do you think becoming a father has inspired your work?

Jon: Well it’s a little early to tell – he’ll only be two weeks old tomorrow. One thing that has struck me already is how nice it is NOT to think about yourself so much. Making books is the best job in the world, but you do end up in your own head a lot because that’s where the work comes from. I do kind of pine a little for the days when I had a summer job or something else that was demanding my time because I always ended up coveting my own time in those days so much more, and I always made the biggest creative leaps in those times too. When you have full control of your time, like I have had the last few years, you kind of take it for granted a little, but those days certainly seem to be over, so we’ll see. Maybe I’ll just be too tired to do anything. I certainly am this week. 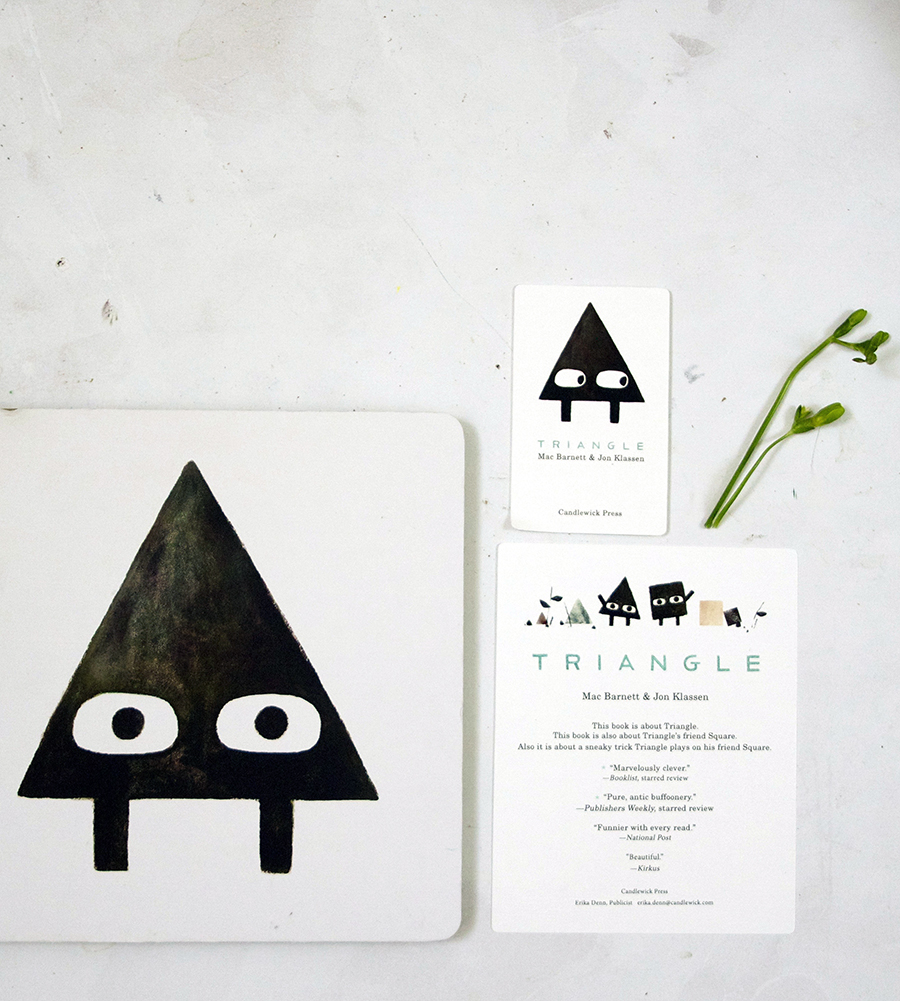